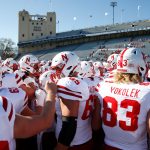 The Nebraska football team will be looking for a second straight win this Saturday when they host the Fighting Illini of Illinois. Husker head coach Scottt Frost said he hopes his team can build on the momentum gained from last Saturday’s win over Penn State. Frost added he’d also like to see more big plays from his offense, in both the running game and the passing game. Frost also revealed the names of the 12 defensive players who were awarded Blackshirts this week: Cam Taylor-Britt, Dicaprio Bootle, Marquel Dismuke, Deontai Williams, JoJo Domann, Collin Miller, Will Honas, Garrett Nelson, Caleb Tannor, Ben Stille, Ty Robinson and Damion Daniels. Frost said they deserved the honor after last weeks performace against Penn State.The Huskers host the Fighting Illini this Saturday at Memorial Stadium, kickoff is at 11:00.

In other Husker football related news:

Hastings quarterback Jarrett Synek will walk on at Nebraska. The 6-foot, 192-pounder had a strong senior season, completing 59.4 percent of his passes for 2,641 yards and 31 touchdowns and only seven interceptions. He also ran for 574 yards and 11 touchdowns. He holds the Class B record for passing touchdowns in a game with nine against Beatrice in 2019. Synek is the eighth known walk-on commit in the Huskers’ 2021 class.

Because of COVID-19 concerns at Maryland, Saturday’s game against Michigan State has been cancelled. It’s their second straight game lost to the virus. Last week’s game against Ohio State was also cancelled. Yesterday a Maryland University official said that the team’s numbers began to improve over the weekend, but an uptick in cases this week forced the cancellation. We have also learned Terps head coach Mike Locksley tested positive for COVID-19 on Wednesday and is isolating at home. The Big Ten now has had four games canceled due to COVID-19 outbreaks. Wisconsin had to cancel their scheduled games against Nebraska and Purdue

The NCAA has now extended the recruiting dead period for all Division I sports through April 15th. The dead period extension was supported by the oversight committees for football, men’s basketball and women’s basketball. The Division I Council however did approve a proposal from the Football Oversight Committee that allows additional flexibility in virtual recruiting

You can also find a link to a story on the various football scheduling models considered by the Big Ten for 2020 at Huskermax.com.

Two games in the Golden Window Classic along with matchups against Creighton and Georgia Tech highlight Nebraska’s revised non-conference men’s basketball schedule announced Thursday. The seven-game slate features a number of changes from the original schedule released back in June. The Huskers open their season with six straight games at Pinnacle Bank Arena. They take on McNeese State Wednesday morning at 11:00 a.m.. Up next is the Golden Window Classic. The Huskers will face Saint Louis (Thanksgiving Day) and San Francisco. The Huskers open the month of December with a home games against South Dakota and Florida A&M. The Husker men will also host Georgia Tech in the ACC/Big Ten Challenge on Dec. 9th. They will make the short trip to Omaha to close non-conference action with their annual matchup with Creighton on Friday, Dec. 11th.

Tom Osborne has released a new children’s book, with all the proceeds going to the “Teammates” project.

The UNK basketball teams opened their season last night at the Health and Sports Center, hosting Emporia State. The Loper men fell 69-57, the Loper women topped the Lady Hornets 59-54. The Loper men and women continue a three game season opening homestand tomorrow afternoon with games against the Washburn Ichabods. The women will tipoff at 3:00, the men at 5:00.

The UNK volleyball team is holding their final “Blue/White” scrimmage of the fall tonight at 7:30. Due to recent COVID protocols, the general public will not be able to attend Loper home games this semester. The Lopers spring season should begin in late February, specific details will be released next month by the MIAA league office.

The Loper football team closes out their abbreviated Fall schedule tomorrow hosting Missouri Western State, kickoff will be at 11:00.

The Hastings College football team will close out their season tomorrow with a game against Morningside in Sioux City, Iowa. Kickoff will be at 1:00. The Lady Bronco volleyball team takes on Midland tonight in Fremont. Saturday’s home match against Concordia has been cancelled, but the season finale against Morningside will be played. First serve at Lynn Farrell Arena is at 4:00. The Hastings College men’s basketball team will travel to Mitchell, South Dakota Saturday to take on Dakota Wesleyan. Tip-off is set for 4:00 p.m. inside the Corn Palace.

NET will televise two High School Football Championship Finals today. The C-2 championship featuring Ord vs. Archbishop Bergan will be televised from Heedum Field in Fremont at 3:00. That will be followed by the Class A Championship Final, Elkhorn South vs. Omaha Westside live from Phelps Field in Omaha at 7:00.

Those games will be recorded for television broadcast at a later date in December.

The Class D6 Championship Final featuring Sterling vs. McCool Junction, at Cope Stadium in Kearney will kickoff tonight at 7:00 p.m. and will be televised by News Channel Nebraska and livestreamed on the NFHS Network.