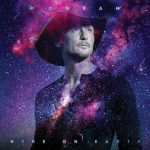 When he released it he said he was trying to create a tapestry with each song talking about different stages of life.

After listening to this album on repeat, I can say that he succeeded.  Each song brings a different sound and a different story.  You can’t wait to turn the next page and listen to the next chapter.

With his first solo album in five years, Tim McGraw takes us on a complete journey with these 18 tracks, including the previously released single, “I Called Mama”.

Hard To Stay Mad At

If I Was A Cowboy

I am going to say it,  this is my favorite Tim McGraw album to date.  The composition of lyrics, the storytelling sound, and the array of styles of instrumentation took me from smiles to full on tears.  I connected to many of his stories and felt like they were my own.

I wanted to tell you to check out my favorite album cut, but I can’t.  I love every single song.  So I will tell you go buy, download, share, and tell all you know that the “Here On Earth” album is a MUST have for everyone.

I love it all…don’t make me pick a favorite!

KANE BROWN’S LATEST PROJECT SHOWS ALL SIDES OF HIM