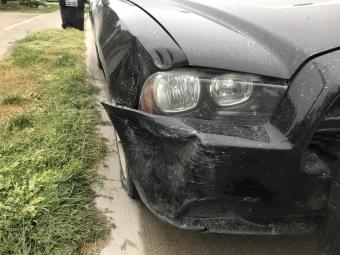 At approximately 1:30 a.m. Friday, a trooper attempted to make a traffic stop on a Dodge Durango for failure to maintain its lane, just north of downtown Lincoln on 14th street. The vehicle refused to stop and fled northbound. The trooper initiated a pursuit.

The Durango fled north on 14th street before eventually continuing eastbound on Arbor Road. During the pursuit, the Durango drove on the wrong side of the road at times. While on Arbor Road, troopers were able to successfully deploy stop sticks to slow the vehicle. The vehicle then turned southbound onto 56th street, while driving on multiple flat tires.

While on 56th street, the suspect swerved toward troopers’ cruisers on multiple occasions, striking two of them. Moments later, a trooper was able to successfully perform a tactical vehicle intervention to bring the Durango to a stop. The suspect then fled on foot, but was quickly apprehended without further incident.

The driver, Thomas Mallory, 26, of Lincoln, was arrested for willful reckless driving, flight to avoid arrest, third degree assault, obstructing a peace officer, possession of a controlled substance, criminal mischief, and numerous traffic violations. The passenger, Amanda Ironcloud, 40, of Lincoln, was arrested for possession of a controlled substance. Both were lodged in Lancaster County Jail.