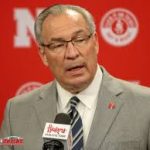 The Nebraska football team was back on the practice field Tuesday. It was the Huskers first organized workout since the Big Ten shut down the fall sports season on August 11th.

Bill Moos says as Big Ten officials work on Plan B they spent time yesterday with NFL General Managers to see how a winter or spring season would align with the league’s combine and NFL Draft. Moos says an announcement will hopefully come in the next couple weeks and that the season will likely be seven or eight games. The Husker Athletic Director also noted that the possibility of a scrimmage similar to the Spring game could be a possibility this fall as the team prepares for the postponed season in the winter or spring.

The Huskers have begun a season ranked No. 1 in the AP poll six times, but not once has that resulted in a national championship.

Roster management is certain to get tougher due to the extra season of eligibility, with one analyst saying the transfer portal “will explode.”

Omaha Skutt is ranked No. 1 nationally in the AVCA/USA Today Super Top 25 poll. Nebraska is well-represented in the poll. Defending Class A state champion Papillion-La Vista South is ranked No. 9, and Lincoln Pius X is 25th. Skutt, which has won the past five Class B state titles, returns most of its lineup from last year, including standout hitter and Husker recruit Lindsay Krause.