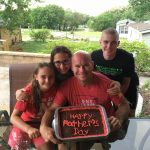 Andy Hoffman has spent nearly a decade raising money for pediatric brain cancer after his son was diagnosed. Now he is fighting his own battle.

“After spending the last 9 years helping my son with his fight with brain cancer, and many others, I have now learned first hand what these people have gone through. On Sunday, July 19th, I had a seizure while running on the cowboy trail in Atkinson. A subsequent MRI revealed a massive brain tumor.

“We are currently at Mayo Clinic developing a plan of attack. Thank you everyone for your thoughts and prayers.”

The official Huskers Twitter account tweeted support, saying “Husker Nation is behind you 100% of the way, Andy.”

Few people epitomize what it means to be a Husker more than @andrewjhoffman.

Now it's our turn to support him.

Husker Nation is behind you 100% of the way, Andy. pic.twitter.com/KlePChRxlc

The Hoffmans became household names in the state of Nebraska when then 7-year-old Jack ran for a 69-yard touchdown in the fourth quarter of the 2013 Red-White Spring Game. That run also put the budding Team Jack Foundation into the national spotlight, appearing on national outlets with the run itself receiving a Best Moment ESPY Award for 2013.

Team Jack has raised $7.5-million for cancer research, according to the organization’s website.