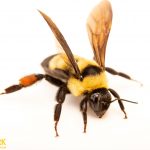 Set by the Nebraska Game and Parks Commission, the Southern Plains Bumble Bee is considered an SGCN because it’s experiencing drastic population decline and thus is at-risk of extinction. The recent species assessment by the Xerces Society and the International Union for Conservation of Nature classified this bee as endangered, although no federal protection is in place at this time.

Joel Sartore, photographer for National Geographic and founder of the National Geographic Photo Ark, a photo series capturing species on the brink of extinction while advocating for their protection, discovered the bee while collecting and taking photos of invertebrates at the prairie.

“It was a surprising discovery,” said Joel, “I always love visiting the prairie, but this identification made it that much more special. I’m excited to share the photos through the National Geographic Photo Ark.”

Katie Lamke, a Bumble Bee Conservation Specialist for the Xerces Society, collected and identified the bee for Sartore, confirming that it is one of four bumble bee species in Nebraska listed as tier 1 at-risk SGCN.

“Nebraska is on the edge of this species’ range,” Katie says, “and we know when species are in decline, those edges are some of the most vulnerable regions. So it’s always a bit of an exciting relief to observe the Southern Plains Bumble Bee in the state.”