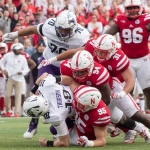 Mike Riley summed up what happened in Nebraska’s (4-5, 3-3 Big Ten) 31-24 overtime loss to Northwestern (6-3, 4-2 Big Ten) on Saturday afternoon at Memorial Stadium in a brief opening statement as he took the podium after another gut-punching loss.

“We had an opportunity to win and let that slip away and couldn’t respond in overtime,” said Riley, looking further dejected after his team’s latest defeat.

The face says it all. #Huskers pic.twitter.com/slHbaB77Qr

Nebraska was once again plagued by interceptions from quarterback Tanner Lee, who finished 21-of-38 for 225 yards, two touchdowns and three INTs.

The three picks are the most he’s thrown since the loss to Northern Illinois on Sept. 16. The last one, which came inside the red zone early in the fourth quarter, eventually led to the Wildcats driving 84 yards to tie the game at 24 with 5:32 left in the fourth quarter.

It was an out route to Stanley Morgan near the sideline. Lee was hit by 6-4, 280-pound lineman Joe Gaziano as he threw the ball, which then allowed All-Big Ten safety Godwin Igwebuike to get the INT on the 16-yard-line of Northwestern.

Nebraska would have gone up 10 points with a field goal; 14 with a touchdown.

“I think Stanley (Morgan) did a good job,” Lee said. “I think he was open there. I think it is tough, you know, but that’s football. Things like that happen and I think it is just tough and it is what it is. It just sucks that it happened right there.”

After Northwestern scored its last touchdown of regulation, Nebraska started its ensuing possession on its own seven-yard-line, but were able to move the ball all the way to the Northwestern 45 with less than two minutes left in the fourth quarter.

After incompletions on first and second down, Lee found tight end Jack Stoll for a five-yard gain up to the 40-yard-line, setting up 4th and 5 at the Wildcat 40.

Instead of going for the first down or attempting a 57-yard field goal, Nebraska elected to punt the ball away with 50 seconds to go in regulation.

“With the time (left) and the ability to pin (the ball) deep, I think Coach (Riley) wanted to (try for the first down) on third down and then punt it,” offensive coordinator Danny Langsdorf said. “I think you’re rolling the dice there. If you don’t (convert on fourth down), you give (Northwestern) good field position with not a long way to go. So, I think we felt like pinning them deep and stopping them there was the right thing to do.”

Northwestern quarterback Clayton Thorson led the Wildcat offense all the way to the Nebraska 42 with five seconds remaining in regulation and attempted a Hail Mary, but Nebraska safety Joshua Kalu batted the ball down to force overtime.

Nebraska won the toss and elected to start on defense. It came down to 4th and goal inside the one, but Thorson was able to drive into the end zone on a QB sneak for the go-ahead touchdown.

Thorson finished 19-of-35 through the air for 243 yards and two interceptions, but scored two rushing touchdowns in the fourth quarter.

On the Huskers’ overtime possession, Lee was sacked for a loss of ten on 2nd down, dooming chances of double OT.

It was a designed screen pass to running back Devine Ozigbo.

“That  obviously was bad timing for that play,” Riley said. “When you get that far behind in an overtime deal, that’s not fun and that’s what caused the collapse of that drive.”

Lee aired it out on 4th and 12, looking for Spielman, but the pass fell incomplete to tie the bow on Nebraska’s third loss in its last four outings.

“We’re obviously disappointed in our finish,” Riley said. “It felt like there had been some good football, and then it kind of felt deflated, right into the overtime.”

There indeed had been “good football” for the Huskers in some spots. Senior linebacker Marcus Newby turned his first career interception into a 49-yard pick six. Junior receiver Bryan Reimers, a graduate of Lincoln East, had his first touchdown of the season and only second of his career.

Unfortunately for Stoll, his shining moment was overshadowed by too many other mistakes and missed opportunities.

“The team goal is to go out there and beat Northwestern,” Stoll said. “Unfortunately, we weren’t able to do that, so I would say I’m walking out of here a little upset.”

>> This loss was Nebraska’s first ever overtime loss at Memorial Stadium. Nebraska was previously 2-0 at home in OT, beating Iowa State 27-20 in 2005 and then Kansas 39-32 the following year. Nebraska is now 8-4 all-time in overtime games, including 0-3 under Mike Riley.

>> Nebraska’s last scoring drive, which ended with a 23-yard field goal from Drew Brown, spanned 18 plays, 79 yards and lasted 9:24. Riley said it was “disappointing” that Nebraska couldn’t come away with a touchdown after such a long drive.

>> Offensive coordinator Danny Langsdorf mentioned that senior tight end Tyler Hoppes was “a little banged up” at the end of Saturday’s game. Stoll said he didn’t know about Hoppes’ condition.