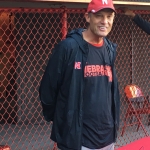 Nebraska will get a few players back this Saturday against Northwestern.

Senior right tackle David Knevel, who’s dealt with a right ankle injury for the better part of this season, will be “available” according to head coach Mike Riley, who gave a full injury update following Thursday afternoon’s practice at Memorial Stadium.

Junior safety Aaron Williams, who’s been coping with a soft tissue injury in his neck, got dinged up during the Purdue and should also be available.

Riley said Thursday was the first time Williams practiced this week, and he would check and see how he came out of it.

Junior safety Antonio Reed (knee) practiced “some” this week, according to Coach Riley.

“We anticipate him being able to play some role,” Riley said. “Not necessarily starting, but some role.”

Junior linebacker Luke Gifford (hip) has been ruled out for the second straight game. True freshman running back Jaylin Bradley (ankle) is doubtful.

“The lack of practicing (for Bradley) this week has been hard,” Riley said. “Perhaps, he could be an emergency guy.”

Riley described Nebraska’s running game as “sporadic.” The Huskers 64.5 yards per game in the month of October, which was the second lowest average in the FBS, according to Kevin Kugler.

Crazy stat via @kevinkugler. In the month of October, Neb averaged 64.5 rushing yards/game. 2nd worst rushing avg in October in all of FBS.

It might not get easier this Saturday. Northwestern allows only 118 rushing yards per contest; that ranks 17th best in the nation.

“I certainly think we have capable runners,” Riley said. “We just have to do a real good job of playing around them and supporting them with good blocking and good blocking schemes.”

Northwestern likes to run a quick pace on offense with a no huddle/tempo-style. Nebraska has seen that a number of times this season, particularly against Oregon, Ohio State, and Purdue at times.

Riley said he really likes the defense’s communication when it comes to defending the tempo offenses.

“It’s one of those things you get better at as you go if you pay attention,” Riley said. “Most of the time, we’ve been in pretty good shape when the ball is snapped, and everyone’s lined up where they’re supposed to be lined up.”