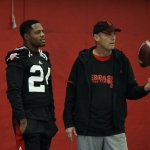 Northwestern’s Justin Jackson, a junior who’s already the Wildcats’ all-time lead rusher, might be the best back Nebraska has faced so far this season, according to defensive coordinator Bob Diaco.

“(Jackson) has an interesting combination of size and speed,” Diaco said. “He’s a slasher, hard to tackle, very loose hips, lot of foot action. But also breaks tackles. He’s got soft hands out of the backfield. He’s an aggressive pass protector. Out of the backs we’ve seen so far, he’s as good, if not better than any of them.”

Jackson ranks fifth in the Big Ten with 644 rushing yards this season on 150 attempts, averaging 4.3 yards per carry and seven touchdowns.

While Nebraska’s struggles in the red zone offensively has been a big topic since the Purdue game, the Blackshirts have held their own inside the opponents’ 20-yard-line, allowing an 81.8 percent success rate.

That figure ranks eighth in the conference and 55th nationally.

“We need to do a better job (in the red zone),” Diaco said. “Red zone defense, critical down defense, to get it all put together, those are moments where it’s like piloting the space shuttle. You need great depth and understanding and culture.”

Purdue had four trips to the red zone on Saturday, and scored a touchdown on three of them.

Northwestern has the sharpest red zone efficiency in the Big Ten with an impressive 93.8 percent success rate. That figure ranks 11th in the nation

Diaco says one of the defense’s goals this season is holding opponents to an average of 3.5 points or less in the red zone.

“It’s just a number that works,” Diaco said. “It’ll end up putting the defense that can have that kind of ratio up in the top echelon in red zone defense.”

Nebraska’s lowly 40-yard rushing performance against Purdue has also been a huge topic this week. Redshirt freshman right guard Matt Farniok says the offense is “almost there” when it comes to having a complete run game.

“It’s frustrating, but it’s a great motivator,” Farniok said. “We see what’s there, and if we do our jobs correctly, we’ll have some great runs.”

Nebraska is currently only averaging 121.9 rushing yards per game, which ranks 106th in the country and 13th in the Big Ten.

Junior linebacker Luke Gifford (hip) was in full pads and riding an exercise bike Tuesday, but did not participate in warm-ups or stretching. 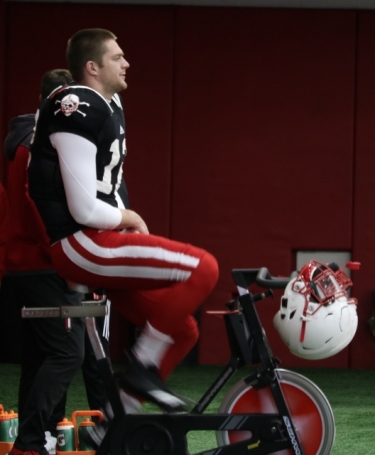 Junior linebacker Dedrick Young still has a cast on his right hand, but was practicing in full pads.

True freshman running back Jaylin Bradley was in street clothes Tuesday, wearing a boot on his right foot.

Junior safety Antonio Reed (knee) was in full pads, working out with a brace on his left knee. Riley said he’s “questionable” for Northwestern.

Sophomore cornerback Eric Lee was not seen on the practice field. He’s currently going through concussion protocol, and his status for this Saturday remains up in the air.

Sophomore linebacker Tyrin Furgeson (turf toe) had his helmet and jersey on, but no pads. He also had a boot on his right foot.

On the offensive line, sophomore center Michael Decker (knee) was in street clothes and on crutches. He’s out for possibly the rest of the season.

Junior right guard Tanner Farmer (63, ankle) was also in street clothes Tuesday. He will miss “an extended period of time,” according to Coach Riley. 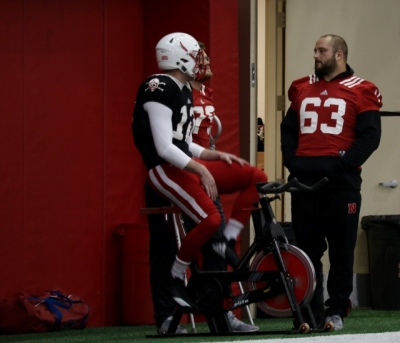 Riley will give a final injury rundown for the Northwestern game following practice on Thursday afternoon.

Junior guard/center Cole Conrad will take over the starting center spot for possibly the rest of the season with Decker out indefinitely.

“When your opportunity comes, you just have to take it and run with it,” Conrad said.

Conrad said he feels “just as good now” as he did at the start of the season.

Brendan Radley-Hiles, also known as “Bookie,” a four-star cornerback and Nebraska’s top verbal commit in the 2018 class, decommitted from the Huskers on Tuesday evening according to his Twitter.