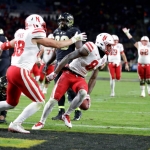 Nebraska has a quarterback in Tanner Lee that can win a game by going to the air. That was evident on Saturday night in Nebraska’s 25-24 win at Purdue.

Lee had a career-high 431 passing yards. He completed 7-of-8 passes for 70 yards in 68 seconds, including the 13-yard go-ahead touchdown to Stanley Morgan with 14 seconds remaining.

That still didn’t veil one glaring issue the Nebraska offense had on Saturday night at Ross Ade Stadium; running the football.

The Huskers ran the ball 27 times as a team for a season-low 40 yards.

Langsdorf is confident the Huskers can right the ship on the ground game by going back to fundamentals and keeping Northwestern’s stingy run defense on their heels.

“I think it’s just a matter of working really hard on the fundamentals,” Langsdorf said. “(Northwestern) has a really stout run defense. That’s been very evident from watching their games.”

The Wildcats’ run defense is statistically the team’s biggest strength, giving up only 118 yards per game on the ground. That ranks 17th in the country and 5th in the Big Ten.

“They are physical and fast,” Langsdorf said. “We’re going to have to do a great job. My Dad told me that you block with your feet and not with your hands, so I told our guys that. We have to do a good job of covering them up.”

Nebraska’s offense had six trips to the red zone on Saturday night, but only one of those trips resulted in a touchdown. The Huskers’ efficiency inside the opponents’ 20-yard-line ranks 12th in the Big Ten and 100th in the country.

Just like Nebraska’s struggles in the ground game, Langsdorf can’t point to one specific cause.

“We didn’t run very well last week when we got down (in the red zone),” Langsdorf said. “We dropped a pass, we got hurried on one. It’s a lot of different things. I think it’s just really simple execution, or going back to things we’ve been good at and making sure we can execute those things.”

“Some of those windows get tighter (in the red zone),” Langsdorf said. “The plays happen quicker. You don’t have as much space, so you’ve got to be on your toes and on time. That’s a big part of it.”

Northwestern’s red zone defense is stellar as well. They’ve allowed opponents a 75.8 percent success rate in the red zone, ranking 25th in the country and 3rd in the conference.

Tight ends coach Tavita Thompson said some of Nebraska’s younger TEs, like David Engelhaupt, Branden Hohenstein, Matt Snyder, Jack Stoll, Kurt Rafdal and Austin Allen have now “been in the system for awhile” and are “starting to get past their initial learning curve.”

“We just got to make sure we can line up,” Thompson said.