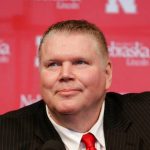 Dave Rimington, a native of Omaha and a two-time Husker All-American, will return to Lincoln as the University of Nebraska’s interim director of athletics. Chancellor Ronnie Green made the announcement today. Widely considered to be the greatest center in college football history, Rimington is president of the New York-based Boomer Esiason Foundation. He has agreed to take a leave of absence from the foundation to lead Nebraska Athletics on an interim basis. The appointment is scheduled for up to 60 days. Rimington will begin the new role immediately. The announcement follows the university’s Sept. 21 decision to end Shawn Eichorst’s employment as director of athletics. Visitt www.HUSKERMAX.com for more.