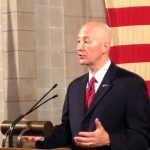 LINCOLN, Neb. (AP) – Gov. Pete Ricketts’ security detail got an unexpected surprise when they drove the governor to a University of Nebraska football practice.

University parking officials ticketed the governor’s official vehicle Wednesday for illegal parking on campus near the Husker practice facility, but the citation was later withdrawn.

A spokesman for Ricketts says university officials told the Nebraska State Patrol to park in the spot where the vehicle was ticketed, and the citation was invalidated “after that was made clear.”

The Huskers are getting ready for their 2019 season. Their home opener is Aug. 31 against South Alabama.

Governor Ricketts on hand for Husker football practice this morning … and his official vehicle gets this from campus parking cops. 🤦🏻‍♂️ pic.twitter.com/O2jwd2ty6g