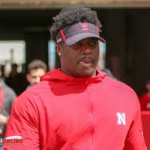 Juco defensive lineman Jahkeem Green was officially added to the Husker’s 110-man roster Monday. The 6-4, 300-pound 4-star prospect was the No. 2 rated JUCO defensive tackle in the country. He registered 117 total tackles in his JUCO career at Highlands Community College in Kansas, including 3 sacks and 15 tackles for loss. Green has three years to play two seasons at Nebraska and provides immediate depth at the nose tackle position. The team had Monday off, but will hold their 10th practice of the fall this morning. The Husker football team will open the season Saturday, Aug. 31st hosting South Alabama at Memorial Stadium. Kickoff will be at 11:00 that morning.

Two Nebraska games are listed in Sports Illustrated’s Greatest Games in College Football History. Coming in at No. 7 is the “Game of the Century”, the Huskers 35-31 win over the Oklahoma Sooners on Nov. 25th, 1971. The 31-30 loss to Miami in the 1984 Orange Bowl is second on their list. The Huskers are also No. 7 on Sports Illustrated’s list of Greatest Programs in College Football History.

The Nebraska men’s basketball team wrapped up their European tour Monday with an 84-62 win over the Italian Select team. Lincoln Pius walkon Charlie Easley’s 15 points led five Huskers in double figures. The Huskers went 4-0 during their overseas visit. The Huskers return to Lincoln tonight and will have some time off before the fall semester begins Aug. 26th. They have an October 30th exhibition game against Doane at Pinnacle Bank Arena. They open the regular season Tuesday November 5th with a home game against UC Riverside.